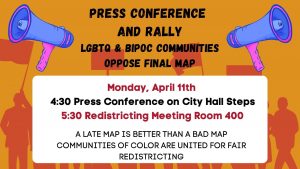 SAN FRANCISCO — In a shocking and sudden move, four members of the San Francisco Redistricting Task Force walked out in protest around 2 AM on Sunday April 10th, after meeting all day Saturday. The remaining five Task Force members voted to pass the draft map anyway, and have faced increasing criticism for the lack of transparency and consensus. This occurs on the heels of increased public scrutiny on the Task Force and a special hearing held on Friday by the Elections Commission, which raised concerns and questions about whether the Task Force is making fair, impartial decisions on public input. The four Task Force members who walked out were Chema Hernandez Gil, Michelle Pierce, Jeremy Lee, and Raynell Cooper.

This latest turn of events occurred at the Saturday meeting to approve the final draft map. The four members walked out shortly after Vice Chair Reiner rescinded her previous vote that stopped Portola from being moved into District 10. In the first vote to move Portola into District 10, the motion failed 4-5 with Vice Chair Reiner as the 5th vote. However, after coming back from a short recess the Vice Chair rescinded her vote and voted to move the Portola despite overwhelming public comment asking to keep Potrero Hill whole and together with the Bayview in District 10. After members Hernandez Gil, Pierce, Jeremy Lee, and Cooper walked out of the meeting, the audience of approximately 30 people also walked out in support. Many Black community leaders spoke during public comment that adding the Portola to District 10 would dilute the Black population and harm the community.

The conduct of the Task Force to date has raised questions about political influence and disregard for public input. The four Task Force members’ decision to leave the meeting abruptly also showed a loss of faith in the process. Communities representing a diverse spectrum of San Francisco residents are hosting a joint press conference denouncing the final draft map, and demanding that the Task Force adds more public meetings to the calendar, even if it means going past the April 15 deadline.

WHAT: Press Conference and Rally

WHO:  Leaders from LGBTQ, Black, Latino, Asian, American Indian and Labor organizations will be speaking.

The LEATHER & LGBTQ Cultural District is:

Make a donation to support the LEATHER & LGBTQ Cultural District.