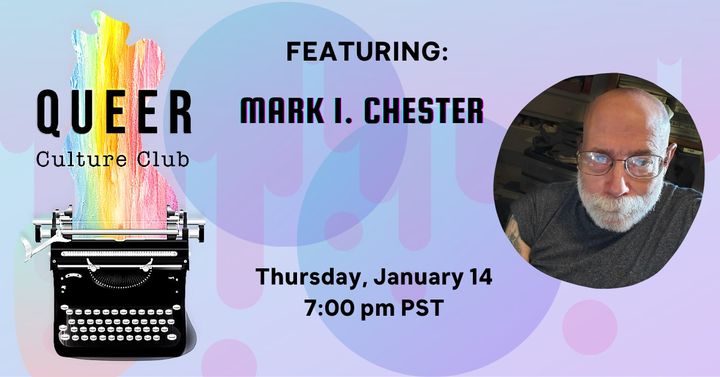 Includes LEATHER & LGBTQ Cultural District events, events organized by other San Francisco Cultural Districts, and other events of interest happening in SOMA.
All times are Pacific Time.
See links to additional calendar pages at the bottom of this page

Our new program series in 2021 is the “Queer Culture Club,” a monthly series on the second Thursday of each month that focuses on LGBTQ people who are defining the queer culture of yesterday, today and tomorrow. These programs feature GLBT Historical Society executive director Terry Beswick as he interviews queer culture-makers, including authors, playwrights, historians, activists, artists and archivists, to learn about their work, process, inspirations, hopes and dreams.

In this first installment, cosponsored by the LEATHER & LGBTQ Cultural District, legendary San Francisco gay “radical sex” photographer Mark I. Chester will discuss his forthcoming new book of contemporary photography, “Street Sex Photos” (2021). The book documents gay men’s sexual lives in the South of Market district of San Francisco in an era when the neighborhood was, in Chester’s words, “like a giant supermarket of the sexual underground.”

Terry Beswick (he/him/his) has served as executive director of the GLBT Historical Society since 2016. At the height of the HIV/AIDS epidemic in San Francisco, he was a founding member of the local ACT UP and was the first national coordinator of ACT NOW, the national AIDS activist network. He advocated for HIV/AIDS research and treatment with Project Inform, the Human Rights Campaign and the White House Office of HIV/AIDS Policy. After the advent of effective treatments for HIV, Beswick worked as a journalist for the Bay Area Reporter and other LGBTQ community publications. More recently, he spearheaded a successful campaign to save and renovate the Castro Country Club for the queer recovery community and cofounded the Castro LGBTQ Cultural District. He holds an MFA in playwriting from San Francisco State University. Beswick served as a Community Grand Marshal for the 50th Anniversary San Francisco LGBTQ Pride Parade and Celebration in 2020.

ABOUT THE LEATHER & LGBTQ CULTURAL DISTRICT

HOW TO PARTICIPATE
This event will take place online. After you register, you will receive a confirmation email with a link and instructions on how to join the Zoom webinar as an attendee. The event will also be livestreamed on our Facebook page at https://www.facebook.com/GLBTHistory/ and then archived on our YouTube page at https://bit.ly/2UyGVbG.

JOIN THE GLBT HISTORICAL SOCIETY
Become a member of the GLBT Historical Society for free museum and program admission, discounts in the museum shop and other perks: www.glbthistory.org/memberships.

Image: Portrait of Mark I. Chester courtesy of the artist.

ONYX Northwest  A Leather Club for Men of Color

Attention all fashionistas and fans of fetish wear, drag, or kinky gear of any kind:

You are invited to
Strut your smut!
in the first annual

Compete for an audience choice award,
decided by the amount of tips deposited in your bucket.
All tips will be donated to LEATHER & LGBTQ Cultural District
and we’ll adore you even more for the win!

If you think you are Most Brazen, contact manager@sflcd.org
—
or just show up prepared to show off!

These are the Fund-Raising Teams that have been created for LeatherWalk 2021 so far.

To join a team, put the Team Name (in parentheses) after your Last Name.  (You can do this when you register as a fundraiser, or edit your Last Name later.)

You can join one of the teams listed above, or create your own team, with almost any Team Name you like.

Teams raising the most money as of noon on September 19, 2021 MAY receive some form of special recognition.